How data shaped the world of racing – F1 with Pure Storage

A comparative interview on how data access changes everything.

In the past 10 years we have seen the emergence of the buzz phrase ‘Big Data’, whether it is in reference to companies trying to protect big data as their asset, big data being traded as a commodity on the black market and dark web, or even the utilisation of big data in the new wave of targeted advertising in the B2C market. Everyone is interested in data and working on how to manipulate it to their advantage.

It is interesting to see how we have evolved to this situation, where every interaction with customers becomes a potential data harvest point and where every business decision is informed by the data we have.

A recent example illustrating the tremendous impact big data can have, is within the Formula One (F1) motor sport world.

With thanks to our partners, Pure Storage, we were able to have a candid conversation with Mercedes Petronas Motor Sport F1 driver, Esteban Ocon at the 2019 Silverstone Grand Prix. Ocon plays a vital role in the team’s strategy and spends more time ‘on the track’ than either Hamilton or Bottas over the three days of a Grand Prix Weekend. Ocon’s role is to utilise data driven Virtual Reality (VR) technology and repeat, replay and scrutinise the practice laps of the team drivers. Across the three days nine billion data points will be collected from over 200 sensors across the cars and tracks. They’ll be covering everything from lap speeds, to more intricate detail like tyre temperature, car alignment, driver biometrics, oil pressure, wind speed and countless others. All of these statistics are pulled together and get pumped into the VR car for Ocon to repeat the drivers laps in the same conditions and test alterations, suggest tweaks and make recommendations for race day.

The data fed back to the team ready for Sunday’s race is imperative and could make that all important difference. The impact this type of data has made to the sport is monumental, and the F1 governing body has enforced time restraints on the engineers and mechanics to when they can make alterations to the car. This means that Ocon ‘drives’ through the night generating as much usable data as possible, so he can make the biggest impact. A key role for the team, when every microsecond and millimetre of adjustment counts.

Talking with Ocon, his calm and laid-back style made you forget that this is an extremely fast paced and pressured environment. He spoke to us about how important analysing every variable is, and it was clear to see his contribution to the team was essential.

Whilst in the pit with Mercedes Petronas MotorSport, we were lucky enough to grab a chat with Chassis Mechanic Leo Stephens. He talked us through how the team constantly make tweaks during races at every pit stop, to improve the driver’s advantage during the race, reiterating the importance of quick access to the data making all the difference. This is where the Pure Storage solution that Mercedes Petronas Motor Sport have adopted gives them that competitive advantage, cutting down the access speed to data from 4.5 minutes to 13 seconds.

We saw the cars docked for data download with the ‘umbilical cord’ plugging into the car ready for extraction. A symbolic representation of the dependence of the car to the data. But this hasn’t always been the case.

We interviewed former F1 team lead Peter Connew of F1 Connew, who competed in the 1970’s and were keen to get his take on the comparative use of data!

When adjusting the car for different tracks, environments and races, how and where did you get your information and data to make informed decisions?

Mainly from the driver, however good or bad he was. Back in those days (1970s) we, as a team, had very little access to data collection. There was much more trial and error, and guesswork.

Informed understanding of the technology is now absolutely vital for success and that comes from data. The main technical input was from measuring surface temperatures across the tyres, to try to understand how much of the tyre was working within its designed temperature range.  And back then, there were several different tyre suppliers, unlike today where we only have one – Pirelli.

When a car comes into the pits after a fast lap, the tyre surface is very hot, soft and sticky. They grip the surface of the track totally unlike tyres on a road car, which just get warmish and stay relatively hard.  Racing tyres are much, much softer.

If the temperature is too low, them a tremendous amount of grip is lost, and if too high, then it will scuff and wear away very quickly.  The tyres do a very low mileage before needing replacement (sometimes, during qualifying, just tens of miles.)

Looking at how much data and statistics the F1 teams can analyse now, what three elements that they can record and capture do you think are the most valuable when anticipating race conditions?- i.e. track conditions, individual wheel speeds, clutch fluid pressures, driver bio-metrics etc?

I’m not sure what they can and can’t capture these days, but:

How much emphasis was put on the driver vs. the car and how do you feel that this balance has shifted with the increase of technological influence?

The driver and the tyres were the most important elements of the car’s potential success in the 70s.  The emphasis now has shifted to the team as a whole, and the technicians who interpret the input data, and then decide the strategy that will give them the best chance of success.

During practice and testing, input from the driver was the best way to improve the car’s performance. During the race, there was little that he could do the help the guys in the pits, with no communication between the two except by pit boards.

I think technology is now king. The team’s success is more likely to be a function of the size of the personnel pool to utilise that technology, and that size is unfortunately a reflection of the team’s budget.  The richer teams now have a disproportionate advantage.  Back in the 70s there was a much more even balance of wealth, as there was a lower quantum of money that the team had to spend.  At TEAM SURTEES in 1970, there were around six people in the team at each race.  Thirty people employed by the whole team, most of whom were at the factory building cars for sale.

Contact us today to discover how Natilik and Pure Storage can ensure you have timely access to the data you need to improve your chances of being the winning team. 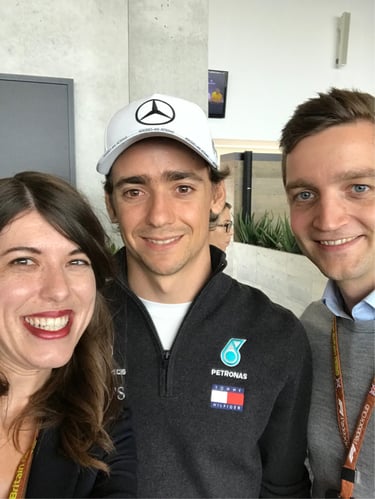 You can find out more about which cookies we are using or switch them off in settings.

This website uses cookies so that we can provide you with the best user experience possible. Cookie information is stored in your browser and performs functions such as recognising you when you return to our website and helping our team to understand which sections of the website you find most interesting and useful.

Strictly Necessary Cookie should be enabled at all times so that we can save your preferences for cookie settings.

If you disable this cookie, we will not be able to save your preferences. This means that every time you visit this website you will need to enable or disable cookies again.

This website uses Google Analytics and Pardot to collect anonymous information such as the number of visitors to the site, and the most popular pages.

Please enable Strictly Necessary Cookies first so that we can save your preferences!